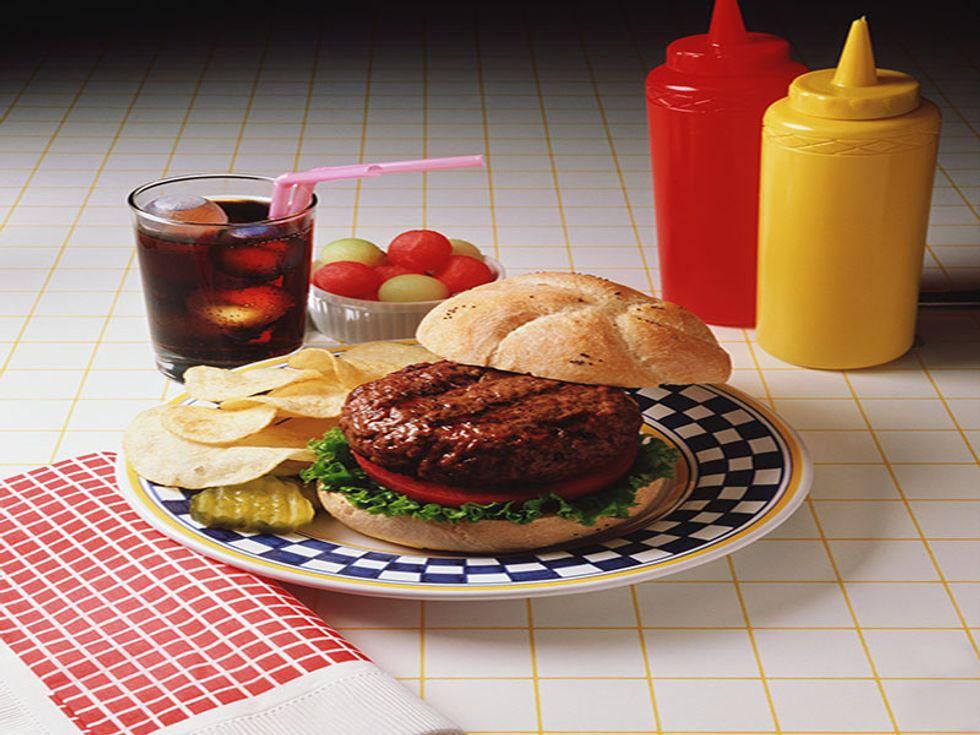 A steady lunch routine of cheeseburgers and fries may shorten your life, but loading your dinner plate with vegetables could do the opposite.

Those are among the findings of a new study looking at the potential health effects of not only what people eat, but when.

Researchers found that U.S. adults who favored a "Western" lunch — heavy in cheese, processed meat, refined grains, fat and sugar — were at heightened risk of premature death from heart disease.

The same was true of people who had a penchant for potato chips and other "starchy" snacks between meals.

On the opposite end of the spectrum were folks who got plenty of vegetables — specifically at dinnertime. They were nearly one-third less likely to die during the study period, versus people whose dinner plates rarely hosted vegetables.

Yet people who ate the most vegetables at lunch showed no such benefit.

Study author Wei Wei and colleagues, from Harbin Medical University in China, said the findings point to the potential importance of timing in food choices.

Other experts, though, stressed that it's overall diet quality that matters.

"That is one of the findings of this study," said Lauri Wright, an assistant professor of nutrition and dietetics at the University of North Florida. "It still comes back to diet quality."

The fact that unhealthy lunches, specifically, were tied to ill effects does not mean those foods are fine at dinner, said Wright, who is also a spokesperson for the Academy of Nutrition and Dietetics.

So-called Western lunches could be a marker of many other things, she said, including a busy, stressful daily routine that involves a lot of grab-and-go eating.

Similarly, Wright said, vegetable-filled dinners could signify other things about people: They might have more time for meal planning, for instance.

There's no reason, Wright added, that a veggie-rich lunch habit wouldn't be healthy.

The findings do raise "some interesting questions" about the timing of certain types of meals and snacks, according to Dr. Anne Thorndike, an associate professor at Harvard Medical School in Boston.

For example, she said, it's possible that having a veggie-rich meal is more beneficial in the evening than at midday. Or maybe people tend to eat "more diverse and nutrient-rich" vegetables at dinner, Thorndike said.

But those are research questions, according to Thorndike, who is also chair of the American Heart Association's nutrition committee.

She stressed that this study "is not meant to be a guideline for healthy eating," and agreed that people should focus on overall diet quality.

The findings, published June 23 in the Journal of the American Heart Association, are based on 21,500 U.S. adults who took part in a federal study between 2003 and 2014.

In general, people eating more plant foods had a lower risk of dying during the study period, while those who favored meat, cheese and processed foods had a higher risk.

In contrast, people who ate a lot of fruit for lunch were one-third less likely to die of heart disease than those who passed on fruit at their midday meal, the findings showed.

There was one habit that seemed bad at any time of day: eating starchy snacks like potato chips and pretzels. People who downed those foods after any meal were over 50% more likely to die of heart ills or other causes, versus those who ate the fewest starchy snacks.

Cutting back on those foods throughout the day is wise, Thorndike said.

And while night snacking gets a bad rap, she noted, there's nothing inherently wrong with that timing. It's just that people often go for starchy or sweet treats.

The American Heart Association has advice on healthy eating.

Are Cortisone Injections Good or Bad for Arthritic Knees?